His insight into what was going on around the world and how it might impact on markets was useful to me, now that I no longer could ask the in-house research team what was likely to happen

His insight into what was going on around the world and how it might impact on markets was useful to me, now that I no longer could ask the in-house research team what was likely to happen. Better still, he had a more independent view of events and their likely consequences – one that proved more prescient than those of my erstwhile colleagues. Amongst the gems that emerged from his daily email alerts was the news that two sub-prime mortgage lenders had gone into administration.

To be truthful, I didn’t know what sub-prime mortgages were then, though I took the trouble to find out as he had indicated this was a more significant development than the muted market response warranted. These mortgages, in a nutshell, were made to those who could not really afford them and probably had little, if any, prospect of paying them back. How on earth could lenders embark on such a risky strategy, I thought. By packaging up these mortgages into products known as Collateralised Debt Obligations (CDOs) and selling them on – easy to do as the yields were high, reflecting the riskier nature of the debt.

The collapse of the CDO market brought about the demise of Lehman Brothers, which in turn brought the burgeoning financial crisis to a head. With banks already in trouble through riskier lending strategies and insufficient capital, it felt in the autumn of 2008 that the world was coming to an end. The recession that followed was sharp and only the action of central banks, which pumped money into major economies through so-called quantitative easing, prevented an economic rout on the scale of the Great Depression of some 60 years earlier. A brilliant explanation of these events can be found in Mervyn King’s recent book “The End of Alchemy” which he wrote after stepping down as Governor of the Bank of England. 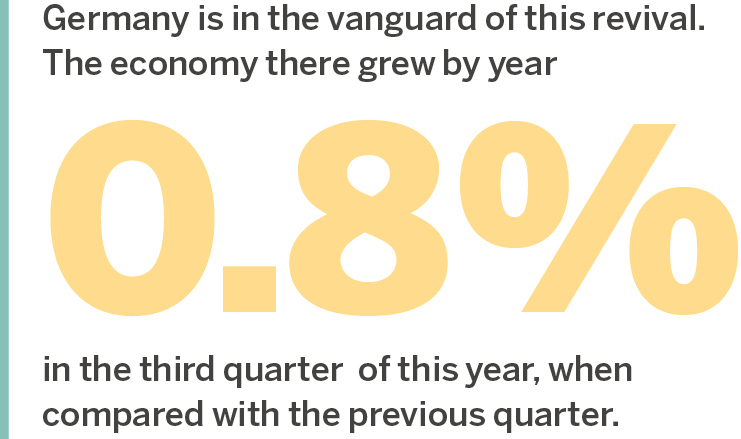 We know now that QE is coming to an end. Has it worked? Markets certainly seem to think so, with several major bourses close to all time highs. The US and UK pulled out of recession some time ago and at one stage our own economy was leading the pack of developed countries in terms of growth, though the uncertainty created by Brexit has somewhat undermined confidence. China, no small player in economic terms, escaped the worst of the downturn by switching to infrastructure spending and still enjoys remarkable growth. Now Europe seems to be catching up.

A recent report from the IMF said that all Eurozone countries were in positive economic territory and that Europe had become the engine of world growth. Germany is in the vanguard of this revival. The economy there grew by 0.8% in the third quarter of this year, when compared with the previous quarter. Much of the improvement appears driven by capital investment, which is, perhaps, why we lag Germany in productivity here. However, a positive outlook for consumption, helped by strong employment growth and modest tax cuts which have created increases in disposable income, confidence and spending, undeniably helps.

Even Italy seems to be pulling itself round, recording the strongest economic growth for seven years. Portugal, an economic tiddler in Europe, has revived remarkably, as my frequent visits there can bear witness. And it doesn’t just end at Europe. Japan is seeing positive growth and a recent Purchasing Managers Index for the services sector recorded a useful rise. Corporate profitability in the US is rising sharply and is helping to underpin a market close to an all time high. China, where economic growth is expected to slow following the Party Congress, did see retail sales rise by 10% recently, confirming the shift towards a more consumer led economy.

There are clouds on the horizon. Geo-political events could upset sentiment, though investor confidence has been remarkably robust throughout recent travails. Oil, which has recovered due to tensions in the Middle East, might well settle back as demand is expected to decline, while US potential production is likely to put a cap on any further increase. The default of Venezuela serves as a reminder that not everywhere is enjoying the same level of progress. But overall we seem to have emerged from the post financial crisis more or less intact. This may not prove enough to sustain the current bull run, but it sure helps.

Also in this issue
Company meetings
Companies we've met this quarter
Charities in focus
They think it's all over. It's not.

The Bank of England (BofE) has raised interest rates with the official bank rate increasing from 0.25% to 0.5%, the first increase since July 2007. For savers this will be a welcome rise, but what…

Bond focus
A new face at the Fed

The Fed is responsible for setting monetary policy in the US in line with its mandate of maximizing employment, stabilising prices, and moderating long-term interest rates.Prior to announcing his…