Had the team of comedians been asked to draft a theory of financial centres with equal succinctness, they would probably have put forward the view that you have to be an island if you want to be a financial centre

Had the team of comedians been asked to draft a theory of financial centres with equal succinctness, they would probably have put forward the view that you have to be an island if you want to be a financial centre.

Let’s test that. London sits in England which is an island. New York sits on the island of Manhattan. Tokyo sits in Japan which is an island. Hong Kong is an island. Singapore is an island. India’s Mumbai is surrounded by water. Mumbai’s southern apex of high value real estate around Colaba and Marine Drive is a peninsula, but it used to be an island until the eighteenth century pioneers of the East India Company filled in the swampy marsh that kept it from the rest of India. Venice’s glory days are past, but it was, and still is, an island.

Have we missed anybody out? Well there is Shanghai. With a market cap of $3.5 trillion it is now the same size as Hong Kong. But Shanghai has a watery surround with the ocean on one side and Taihu Lake on the other. The spidery web of criss-crossed waterways that would make leaving the city without using bridges and keeping your feet dry pretty difficult, are testament to surroundings which were historically more aquatic.

I also note the strong connection with our nation’s history and the world’s financial centres. Perhaps a grounding in the strong property rights of England’s common law helped these islands on their way? Venice seems to be the only exception if you are prepared to allow the outcome of the Second World War to credit England with some influence over the Japanese.

Wind back a couple of hundred years and the link between water and trade is easy to explain. Most bulk transport was marine based – you needed merchants to buy and ship the goods and they needed banks and insurers to finance and de-risk their trade.

Once an island has got a community of prosperous merchants and financiers it starts to draw economic migrants who are attracted by the ability to use their talent, rather than balance sheets, to grow wealth. Then the island’s limited land supply kicks in and property price rises start making everybody wealthier and that draws more and more people. As everybody enjoys relative prosperity so the effect snowballs. International trade drives out the xenophobic, thus facilitating the flow of yet more wealth creating migrants, capital and innovation.

I also have at the back of my mind that an island must be easier to defend than a continental city; and in that respect a more attractive location to store your wealth. Over the centuries, warring Europeans seemed to have ended up owning or controlling each other through time. Not so with water-protected England. 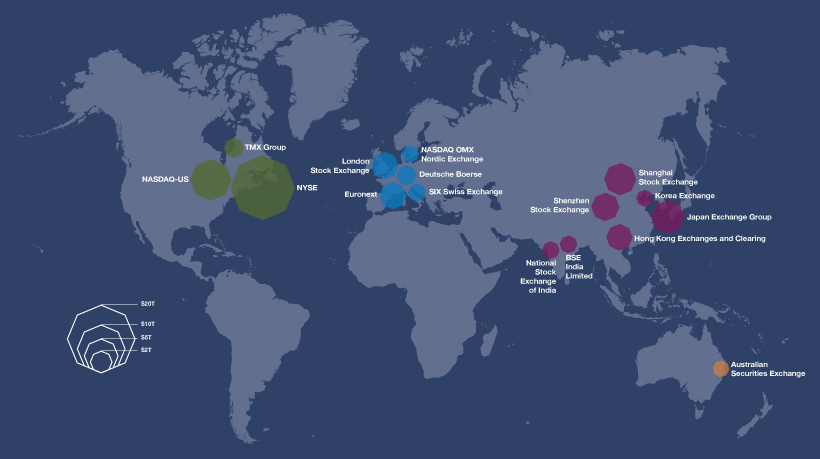 The $1 Trillion Club: 16 exchanges, each with a total market capitalisation over $1T, can be considered to be in the exclusive $1 Trillion Club
Source: The Money Project, money.visualcapitalist.com

So where are all these historical anecdotes leading? The big question is whether London continues to prosper in a post-Brexit, digital world where arguably financial centres should be indifferent to their water content.

Frankfurt and Paris are pretty short of water, let alone coming anywhere close to being islands. The only obvious island-like place in continental Europe seems to be Copenhagen, or possibly Amsterdam. According to the annual Global Financial Centre Index, London is the world’s top financial centre, with Frankfurt at 18th and Paris in 32nd place. So in any race, the continental wannabes have got a lot of ground to cover before they even reach a level peg with London.

The press has us worrying about what will happen to London’s dominance in euro-clearing. Francois Hollande says it has to end, but Dombrovskis, who took over the EU commission’s financial regulation brief on July 15th, is making more conciliatory noises. Will the current financial services passporting be re-enacted in new UK/EU treaties?

I would imagine that pragmatism will prevail, but if it does not then London’s innovation should win the day, as it did with the misplaced taxation of US deposits that drove the creation of London’s euro-dollar market in the 1960s. The Sarbanes-Oxley governance laws then pushed over-burdened corporates to list in London by preference.

If we regain our right to pay bankers what we want to pay them and UK regulation reverts to one that rewards entrepreneurialism then I can’t see much drifting back to the continent. Least of all London’s strong community of French financiers who can’t be eyeing the high tax rates and pro-labour employment laws in Paris with much relish.

The European tendency for over-regulation should also help London in the long run. As should our growing hub of Asian and US banks which interface across our convenient time zone and even more convenient language.

History is on London’s side so I suggest that our ranking amongst European financial centres will remain unchallenged. At a more frivolous level, I wonder whether, having reached the end of this article I should not rename it the “Royden Theory of Financial Centres” in a thinly disguised effort to immortalise myself in the annals of corporate finance history?