The threat of the Delta coronavirus variant could impact the global recovery.

Over the last seven months Herculean efforts around the globe have pushed the world closer to leaving COVID-19 behind. This push, engendered by vaccination and further economic recovery, has not however been evenly distributed. For some, shrewd vaccination rollouts have made lockdowns, increasingly a thing of the past. Meanwhile many remain firmly in the grasp of the virus, battling newer and potentially more infectious, COVID 19 variants. A more positive outlook has brought with it issues stemming from the heterogeneous pace of recovery. Reopening economies, hungry to resume normal life, have added pressure on supply chains that remain weak and vulnerable. The net effect of these demand and supply imbalances has been that inflation numbers have outstripped almost all forecasts. This has raised concerns over whether inflationary pressures will be temporary or more enduring. Notwithstanding this, central banks have kept the monetary taps open as they clearly still view the downside risk posed by a deflationary environment as greater than that of overheating. In addition to this, governments continue to support industry and individuals financially, even as the foreboding of overheating rhetoric has grown throughout the year.

In the face of this, equity markets have been broadly resilient with the MSCI world delivering +16.65% since the start of the year and many equity markets continuing to reach all-time highs in recent months. Under the surface however, 2021 has delivered a landscape that has at times been difficult to navigate. The first quarter saw value oriented sectors and markets buoyed by the recovery of bond yields in a continuation of the reflation trade which began in late 2020. As Q1 drew to a close these fortunes began to reverse along with bond yields and many of those sectors beaten in Q1 have risen to outperform again since then. These shifting tides have at different points been a boon and a drag for nearly all markets and asset classes. What clues does this gives us about what we might expect going forward?

Beginning across the Atlantic, the S&P500, representing US equities, rose +17.2% since the start of the year. The first quarter of 2021 saw the yield on the US ten year rise from 0.91% right up to a peak of 1.74% at the end of the first quarter in March (see chart below). Rising bond yields spelled bad news for more interest rate sensitive growth stocks, but represented welcome news for value stocks. Q2 delivered quite the opposite result. The US ten year yield began to topple again as investors, worried about economic growth and the COVID-19 delta variant, moved into bonds driving treasury prices up and yields down. US bond yields have continued to fall ever since. From a sector perspective, Energy, Financials and Industrials outperformed initially as rising oil prices, bond yields and fiscal spending buoyed shares. More recently, the US was confronted with an almost complete reversal. Helped by falling bond yields, Tech, Healthcare and Real Estate equities have outperformed. The pressures of reopening coupled with constrained supply produced US CPI inflation of +5.4% for the year up until June 2021. Yet for the moment at least, investors seem happy to look through recent inflation numbers and seem more concerned with the risk of disappointing economic growth. 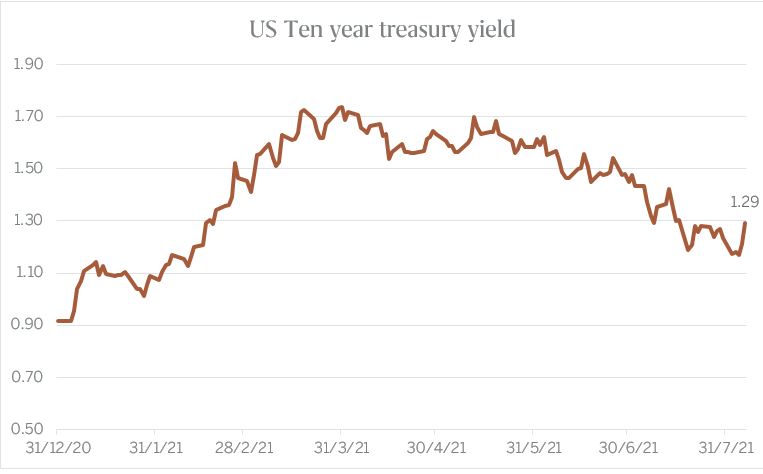 The UK’s large-cap equities, represented by the FTSE 100 index, had a slightly tumultuous start to the year as the UK descended into yet another period of tight COVID restrictions. As a result, the FTSE 100 delivered just +3.9% in Q1 whilst international equity indices outperformed. As the year progressed however the UK government’s bets on the AstraZeneca vaccine and prioritisation of first jabs started to pay off and the UK’s vaccination rollout excelled. This allowed optimism to spread. The FTSE 100 index has since delivered a respectable +10.3% YTD. June however offered a reminder of the fragility of the Brexit divorce when Boris Johnson announced at a G7 meeting that he would not hesitate to suspend the Northern Ireland Brexit agreement. This culminated in a dispute regarding the export of chilled meats, eventually dubbed ‘Sausage Wars’. Porcine conflicts aside, the UK has managed to remove nearly all COVID restrictions and, for the moment at least, the high vaccination wall has prevented anywhere near the damage seen in the first and second COVID infection waves.

Looking across the Channel, European stocks have done well since the start year with the Euro Stoxx 50 index delivering +15.9% since January. In the early months of the year, the EU’s vaccination campaign was routinely dogged by supply problems regarding the AstraZeneca jab which resulted in their vaccination rates drastically lagging those of the UK and US. This seemed not to weigh on European equities and instead the weakening of the Euro against the US Dollar, and subsequent increased export competitiveness, proved to be a boon for European exporters. More recently, the recovery of the EU’s vaccination rollout enabled many European nations to catch up to the vaccination levels seen in the UK and US (see chart below) with 61.7% of EU citizens having received at least one jab compared to 59.1% in the US. This may just have allowed some European nations to reach high enough levels to avoid the worst of the delta variant. 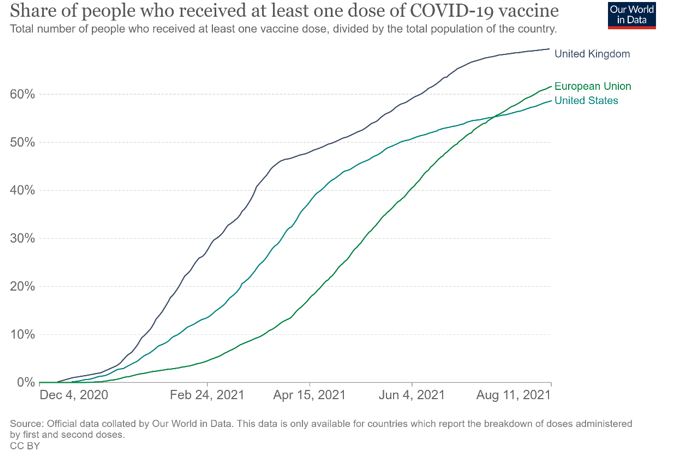 Turning eastwards, the pro-cyclical and heavily value oriented Japanese TOPIX equity index delivered +8.3% for the first quarter. However, since then Japan has underperformed and has delivered a more muted +6.5% up until now (see chart below). Japan’s vaccine rollout seriously lagged its Western peers as the government insisted on rigorous domestic testing of vaccines before approval. Japan, which was only mildly affected by COVID 19 in 2020, has recently seen increasingly severe waves of cases with Japan now experiencing the fastest rate increase in case count in the G20 major economies. Notwithstanding this, officials decided to press on with the Tokyo 2020 Olympics. Given Prime Minister Suga’s recent falling approval ratings, how COVID 19 restriction measures are handled in the wake of the Olympics will be crucial for Suga’s success in the upcoming House of Representatives elections. Failure here could see Suga displaced and spell more uncertainty for Japan and Japanese markets. 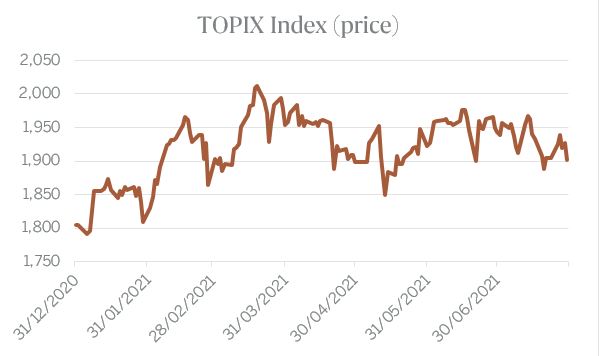 Since January, emerging markets have underperformed developed markets. The unexpected strengthening of the US Dollar will not have helped emerging economies, for whom lots of their predominantly US Dollar-denominated debt has become more expensive. In addition to this, throughout the year it has become increasingly clear that emerging market access to vaccines, vital if they are to stem the effects of COVID 19, will remain limited well into 2022. This bifurcation in the vaccination rates between the emerging and developed markets will continue to weigh on market sentiment for some time to come.  Many emerging markets, like Brazil, have also found it necessary to raise interest rates to combat increasing levels of inflation which has not helped economic growth.

China, a large constituent of emerging market indices, has recently delivered another wave of regulation scares as it becomes increasingly clear that the Chinese Communist Party wants to clip the wings of its dominant tech companies. This, in conjunction with tighter monetary policy and the Biden administration’s increasingly hawkish stance towards China, will likely continue to weigh on Chinese sentiment going forward.

So far it has been a year of two halves with regards to government bonds. The US ten year yield rose considerably from the start of the year on the back of a better than expected economic recovery and greater than expected fiscal stimulus driving inflation. This was made possible through budget reconciliation after the Democrats gained a technical Senate majority in January. Since March however, yields began to slide back down as investors bought up bonds on the back of worries about the delta variant and weakening economic growth. Year to date, corporate bonds have outperformed government bonds slightly, however both still delivered slightly negative returns.

Bond investors also appeared to look through much higher than expected inflation numbers, corroborating US Federal Reserve (Fed) Chairman Jay Powell’s view that inflation remains transitory. Echoing the change of policy made by the Fed a year ago, the European Central Bank (ECB) also announced a plan to target average inflation.  There is now potential for Eurozone inflation to run over 2% for a period of time without seeing interest rate rises. Whilst tapering asset purchases is quietly being mooted by central bankers, for now monetary and fiscal policy remain accommodative.

Gold initially fell in Q1 as the sanguine mood reduced demand for traditionally perceived safe haven assets. Come March, gold came back into favour due to higher inflation figures and delta variant worries. The second quarter of this year mirrored the first as the gold price returned to highs by the end of May. Gold is doing what we would expect as inflation worries ebb and flow.

Oil continued to rally into 2021 with Brent Crude currently at c. $73 a barrel (see chart below). OPEC+ threatened to fall apart when a dispute between Saudi Arabia and the UAE led to the extension of a decision on oil supply. Since then, a plan has been agreed upon that would see conservative supply increases to the end of 2022 at which point oil supply should be back to pre-COVID 19 levels. The oil price hardly reacted though, as supply still lags demand by around six million barrels per day. For all the talk of metal prices topping out this year, supply still remains constrained in conjunction with surprisingly resilient Chinese demand. Iron ore prices have tailed off in recent weeks as China manages to rein in steel producers, however it is too early to tell if this trend will persist. Commodity prices remaining stubbornly high may also spell more cost-push inflation in the future. 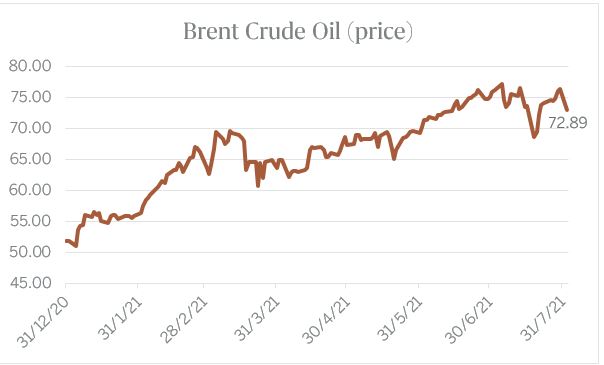 As a team we expect the delta variant to remain front and centre as we enter the autumn months and seasonal variations in the virus start to kick in. Whilst we are broadly confident in the level of vaccination achieved in the UK, US and Europe, the delta variant still remains a risk and in particular for emerging markets where poor access to vaccines presents a bleak picture for the coming winter. Broadly however, markets seem to recognise the effect COVID case surges have on economies, which is now more muted than before.

Beyond COVID, the coming months should see governments beginning to wind back their support packages and whilst in the UK we expect the impact to be limited due to the small number of people still using the furlough scheme, this is again a risk to watch. Finally, inflation numbers will continue to be closely watched. Whether inflation turns out to be transitory, as central bankers predict, will control how monetary policy responses develop and will have great implications for the financial markets.

Given all of the above, we remain committed to actively managing our clients’ portfolios with diversified exposure across to range of sectors and geographies. We continue to believe this to be the most sensible approach to long term wealth creation and thus it remains integral to our approach to investment management here at JM Finn.

Conceptually we have a reasonable understanding of inflation. As an economic term, inflation represents the general price rise of goods and services over a predetermined time.

Inflation affects all aspects of the economy. Read below to find out what inflation looks like at the moment and what we can potentially expect in the coming months.

In this article, fund manager James Godrich provides the insight on the current financial markets and reviews some of the recent activity in the CSI funds.

Market Commentary
Where are the Workers?

Brian Tora provides insights on the latest trends in the financial market. Find out about the two biggest concerns to investors right now.