Honey, I stressed the kids

Unfortunately, we have had a number of horrific events over the last six months or so which have rightfully featured centre stage; be they terrorist attacks or tragic incidents such as Grenfell Tower

Unfortunately, we have had a number of horrific events over the last six months or so which have rightfully featured centre stage; be they terrorist attacks or tragic incidents such as Grenfell Tower. But, even outside of these events, which deserved all the coverage they got (and still get), I feel we have been pummelled with overly-negative news flow. Each day we are reminded of the next sector or part of the UK economy which is sure to get a bad deal from Brexit. Or that we’re all going to be shipped off to Frankfurt. This chipper rhetoric is then punctuated by headlines of our ‘weak and wobbly’ leader, with perhaps a side-column on childhood obesity to whet the pessimist’s appetite.

It got me thinking about how this may affect us, the public. More specifically, does this relentless pessimism and fear-mongering elevate our stress levels?

Aptly, the theme chosen by The Physiological Society for 2017 is entitled Making Sense of Stress. This report marks the 50 year anniversary of a survey conducted by psychiatrists, Holmes and Rahe, in which they asked a cross-section of the public to rate how stressful they find (or would find) 43 chosen events. This year’s version polled 2,000 British adults on a trimmed down list of the original questions. A few modern ones were added and some near-duplicate instances were removed, as were those that harped back to a very different era, such as ‘Wife beginning or ceasing work outside the home”...

The idea that a 20 year old would be almost as stressed losing their iPhone as contracting cancer is nonsensical.

There were some similarities between the two sets of results, such as the death of a spouse which occupied both top spots, i.e. ranked the most stressful. But also some interesting differences. Where 2nd and 3rd places in 1967 were divorce and marital separation, divorce slipped to 6th in 2017. This perhaps reflects the rise in social acceptance of divorce in the modern world. Others that have notably climbed the leader board over time include being fired and going on holiday.

Although interesting to compare the two reports, the result that caught my eye most pertains specifically to the 2017 survey and is shown below in graphic form. For reference, the participants were asked to rate how stressed they would be from 1-10, 10 being most stressed. 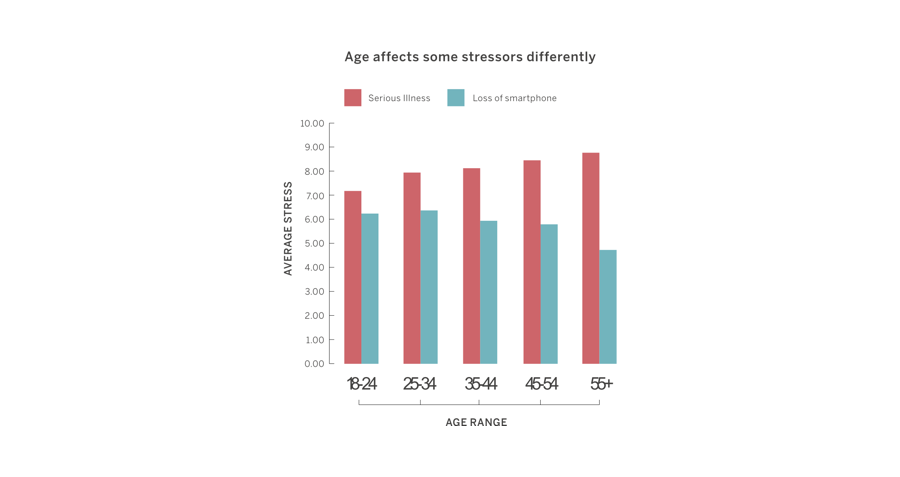 I would have expected the shapes of the graphs to evolve in the way they do, but it is the proximity of the two scores for the 18-24 year olds that I find astounding. The idea that a 20 year old, say, would be almost as stressed losing their iPhone as contracting cancer is nonsensical.

It is widely accepted that the younger generation are more dependent on their smartphones than their elders. Moore’s law marches relentlessly on, bringing with it mobile functionality that benefits all age groups – be it a high quality camera, or simply the ability to access emails on the move. But I believe it has been the explosion of social media, and the youth’s subsequent addiction to it, that has contributed to the perceived need to have your phone accessible at all times. After all, if you lost your phone you may miss out on a third-cousin’s friend’s new Instagram photo of a bowl of pasta – now, wouldn’t that be stressful?

But, all that aside, I still struggle to account for the similarity in stress level scores. Is there something else going on, biologically?

Let’s examine stress itself. There are two types; acute and chronic. The former is a short sharp reaction brought on by being jumped out at, for example. The latter is prolonged stress such as that brought on by being stalked by a hungry pack of wolves for days on end. Chronic stress is much more damaging to the body, predominantly thanks to elevated cortisol levels for extended periods of time.

Cortisol is relied upon when other shorter-term chemical reserves that we use to ready our bodies for attack, such as adrenalin, are depleted. So those with larger reserves often do not rely on cortisol at all for acute stress, or as heavily for chronic. These people are better at dealing with stress, by and large.

What’s the significance of this? Well, it has been shown that you can train your body to better manage stress, bolstering your other chemical reserves. And a way to do this is through acute stress exposure, both through physical and emotional stimuli. Exercise is one efficient way and the other is stressing your internal temperature gauge. Who knew plunging yourself into cold water with regularity could improve your road rage?

It has been shown that you can train your body to better manage stress.

The great physiologist Walter Cannon talked to this in the 1920s, postulating that the advent of air conditioning, central heating, hot running water, and other home comforts could deprive us of ‘important protective advantages’.

Could this go part of the way to explaining why the younger generation are seemingly less able to deal with such a menial inconvenience as losing their Samsung? Has the prevalence of technology had the double edged effect of discouraging physical exercise and minimising thermoregulatory stress, and thus our ability to deal with what were once insignificant stresses?

Clearly, I am in no position to answer that question definitively. Even armed as I am with one physiological study and a primitive knowledge of the chemical reactions governing stress gleaned from a single short book (but, a fantastic book at that).

But, perhaps if we all exercised a touch more, turned off our heating, had the odd cold shower, and ignored the bulk of the newspaper headlines, we might just all lead more relaxed lives.

Not surprisingly, there is a strong correlation between Rio Tinto’s (Rio) fortunes and iron ore price.