Well, time has moved on and, whilst I have not joined the Labour Party, I am certainly keen to understand its policies and where they are heading

Well, time has moved on and, whilst I have not joined the Labour Party, I am certainly keen to understand its policies and where they are heading. In particular whether the Labour Party is painfully re-birthing itself into something rather different from what we are used to.

From an investor’s point of view, a Jeremy Corbyn Government does not look great. John McDonnell, the Shadow Chancellor, said “Building an economy for the many also means bringing ownership and control of the utilities and key services into the hands of people who use and work in them”.

Nationalising our utilities is one thing, the price is another and it is the latter aspect that worries me. We have read about nationalisation at balance sheet values which are c50% below market values. The difference in value suggests that private ownership has created value. This is in contrast to the post privatisation position in the 1980s where the value ascribed by the market was at a discount to the balance sheet value; suggesting that investment decisions during public ownership had destroyed value. I have also heard talk of different categories of investors getting paid different prices: hedge funds get paid less than pension pots, for example.

Nationalising our utilities is one thing, the price is another and it is the latter aspect that worries us.

Investors’ primary concerns are that the proposed increase in public debt would cause interest rates to rise and that gilts and other bonds would fall in value. I am also concerned that higher interest rates, when combined with tax hikes, especially in corporation tax, would cause the value of companies and their share prices to fall. If investors were denied attractive returns in the UK, and indeed were fearful of their investments being expropriated at less than market values, they would probably want to invest outside the UK, a scenario that would likely cause the pound to fall.

So that begs the question, could Labour get elected and would they pursue these policies? It strikes me that the bulk of Labour MPs are not inclined to support the extremes of the Corbyn / McDonnell agenda. Labour would only vote this way if moderate MPs were replaced with Momentum sympathisers. Momentum is the hard left organisation lead by Jon Lansman, or “Lansperson” as he is known amongst moderate Labour MPs who now collectively refer to themselves as sensible Labour.

Momentum is getting more control. There are stories of Momentum “thugs” dominating local Labour meetings and literally bullying moderate Labourers out of the party. Momentum have a clear objective to take over the party, as often spelt out by Jon Lansman himself. 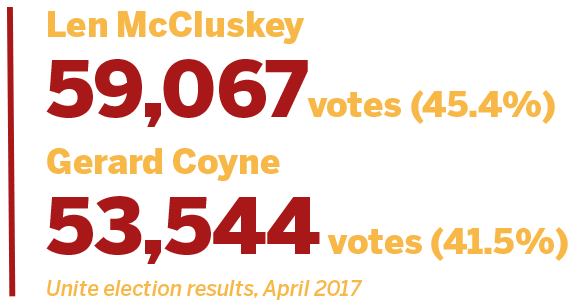 Critical to that success is Lansman’s linking up with the Unite Union, led by Len McCluskey. But McCluskey’s position is less than certain; he won the April Unite election, but only just; with 59,067 votes (45.4%) compared with Gerard Coyne's 53,544 (41.5%) on a turnout of just over 12%. Amid allegations of vote rigging and irregularities, the vote is being investigated for allegations of electoral fraud. If you see McCluskey announce a new vote ahead of the official verdict, it will just be McCluskey trying to pre-empt an adverse and embarrassing ruling against him.

The turnout indicates just how lethargic moderate Labourers are. Many are believed to have not voted for fear of recriminations and/or because they thought that the result was a foregone conclusion. McCluskey’s response to Coyne’s challenge was to sack him from the union for apparently bringing the union into disrepute. Having the audacity to stand against McCluskey was probably the real reason. We hear that other anti-McCluskey activists are being purged as well which gives you an idea of how coercive and unpleasant life in the union must be right now.

There is a chance that the low turnout and the reluctance to vote against McCluskey might get trumped in an election re-run. If Unite members actually thought that there was a recrimination-free and realistic chance of voting out their Marxist-leaning incumbent leader, they might well go for it.

After Jon Lansman’s recent election to Labour’s ruling National Executive Committee, it was surprising that its first act was to replace Ann Black, on the left of the Labour Party, with the equally left-leaning Momentum director, Christine Shawcroft as Chair of the disciplinary committee. Apparently the real reason was that Ann Black was too independent-minded and would not promise unconditional obedience to the Momentum line.

Momentum are now moving to change the rules about the reselection of MPs. As things stand, a local Labour party needs 50% to force an incumbent Labour MP to go through a re-selection process. Momentum want to change that to 30% so that the ranks of new Momentum-aligned Labourers can more easily influence the outcome. Momentum’s dominance over Labour’s ruling National Executive Committee helps advance their cause.

Momentum are also making progress at the local level as we have seen with their take-over of Haringey Council. Watch for more councils falling to the hard left.

The turnout indicates just how lethargic moderate Labourers are.

This really doesn’t bode well for moderate Labour MPs who are facing possible de-selections. But if that happens, they won’t go quietly and the more of them there are, the more likely they will be to stand as independents at the next election. That effectively splits the Labour Party and that means its chances of forming a government become less likely. There has been talk of the Shadow Cabinet planning to lead 170 or so sensible Labour MPs up to the Speaker and declaring UDI, or a Unilateral Declaration of Independence, by informing the Speaker that they are now the official opposition. That limits the amount of de-selecting that Momentum can pursue for the time being.

In my opinion, what this country needs is a strong political leader. Personally I don’t mind if this comes from the ranks of the disaffected moderate Labourers or the Tories. But something needs to change. Perhaps I should revisit my own political aspirations?

I would also welcome ideas on how the moderate Labour MPs should organise themselves. And also how Labour’s silent majority might rescue themselves from a political landscape of purges and expulsions that to me has parallels with a bygone era.

We have seen excessive returns from stock markets over the last few years comfortably above long term returns over a twenty year period, which have averaged nearer 6%-7%.

Despite lacking strong comparatives, Whitbread has started the year well in both core divisions. Analysts are comfortable with the underlying UK economic recovery and point to major drivers this…