Last quarter I fancied that the FTSE100 would move towards 7200. The reverse has happened. From an all time high of 7123 on 1st May, we saw the market pull back to the current 6000 level.

Over the quarter the picture has turned from confused to bearish; we have now had a lower low and a lower high which means that investors are selling harder at lower levels.

But there are some conflicting signals which mean that doom and gloom is not the worry it might seem at first glance. Although we have had a break of the uptrend since March 2009, that was followed by a break into new all-time high ground. This behaviour is sending different messages.

So in terms of calling the market’s move, it would not surprise me to find that the 6000 level offered some solid support and that in three months’ time the market is pretty much unchanged from today. 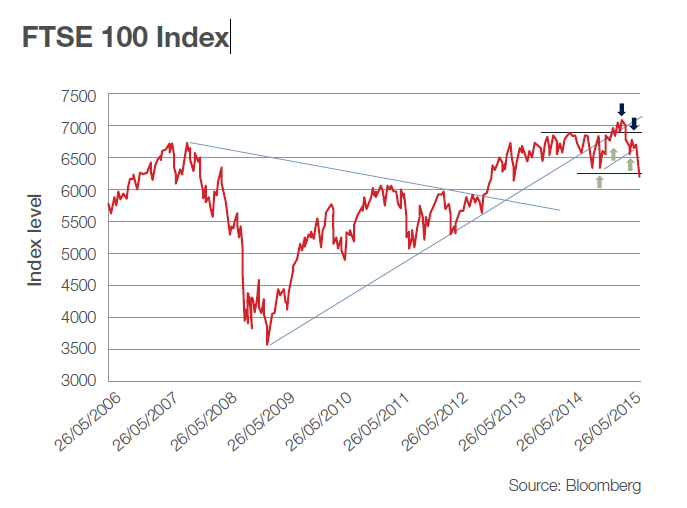 Whilst there are signs that the bull is tiring, there is still an above evens chance that the S&P 500 could nudge into new high ground; but again this will be a prelude to a downside correction.

What we have to work out now, is where the market will stop falling. Support is thin on the ground with only the uptrend from the August 2011 lows to offer a brake to the declines. If we break the up-trend then we are in no-man’s land until the situation resolves itself.

But there is one other bright light that may help the market: in the run up to our recent decline, the highs pretty much saw sellers dominating buyers at the same levels. The mid-August fall obviously shows that buyers have clearly disappeared. We have to wait to see just where sellers begin to overwhelm buying on any rally. Is the fall just a lack of buying, or are we going to see sustained selling push the market firmly lower?

To some extent the jury is out until a clearer picture emerges. Until then, I am going to call the market somewhere in the 1,800 to 2,000 range for the next three months. 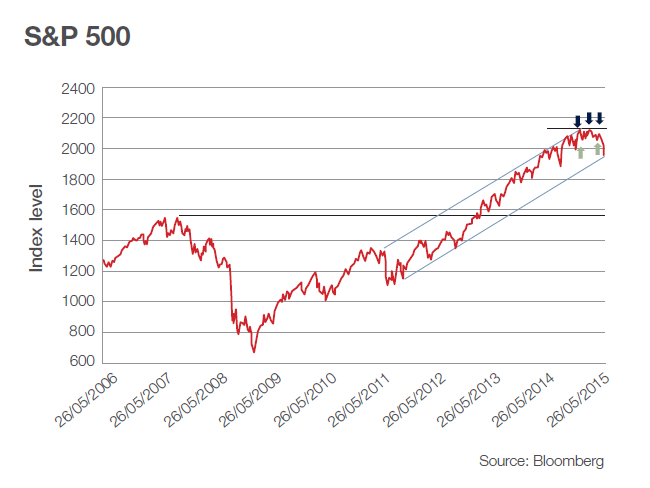 Also in this issue
Meet the manager
Alex Gulliford

Aggreko is a global supplier of temporary and/or emergency power supply equipment to a wide array of industries. It has significant earnings exposure both to Emerging Markets and commodity driven…

Independent view
Taxation of dividends from 2016 The Winners & The Losers

In the Summer Budget, the Chancellor announced the biggest shake up of the taxation of dividends since 1999 to take effect from 6 April 2016. This article explores these expected changes and their…