In this article James Ayling glances back at the competing powertrains of the 19th century, compares the total cost of ownership and powertrains of Battery Electric Vehicles (BEVs) and Internal Combustion Engine (ICEs) cars, and explores what impact BEVs may drive throughout the automotive industry and broader economy

In this article James Ayling glances back at the competing powertrains of the 19th century, compares the total cost of ownership and powertrains of Battery Electric Vehicles (BEVs) and Internal Combustion Engine (ICEs) cars, and explores what impact BEVs may drive throughout the automotive industry and broader economy.

Electricity and water are a deadly mix but let’s leave that melting pot aside for the time being. Instead, we seek to explore the disruptive impact battery electric vehicles¹ (BEVs ) could have on the internal combustion engine (ICE), whose dominance may disappear over the next decade.

Early BEVs appeared in the  first half of the 19th century but struggled to gain traction because of their feeble range and lack of rechargeable batteries. Yet the 1859 lead-acid battery invention unlocked rechargeable batteries and improved range which revived BEV aspirations. In the 1890s London saw “Hummingbird” (a reference to the vehicle noise) electric taxis on the streets. These early BEVs offered several advantages over ICE cars such as automatic start (no manual cranking), no gearing, no smell and minimal noise pollution.

Now the major efficiency gains for ICEs have been achieved and the pace of improvement is slowing.

Now the major efficiency gains for ICEs have been achieved and the pace of improvement is slowing. Meanwhile, battery chemistry continues to progress and new cell formulations offer potential step changes in performance. BEVs today offer sufficient range for most people, avoid exhaust pollution and are quieter and easier to operate. Importantly, BEVs are also a technologically superior enabling platform for autonomous vehicles (more on that another time).

Does it all boil down to cost? BEVs are increasingly cost competitive with ICE. As consumers, we are typically poor at considering the total cost of ownership (TCO) of anything. Economists debate whether we are myopic or rational in limited domain i.e. we shortcut our decision making. Regardless, in the context of car ownership, we tend to place greater emphasis on upfront cost versus lifetime cost. So, let’s consider a simplified example of the five year TCO for the BEV versus ICE. The results below might surprise you: BEVs are already cost competitive with ICEs when carefully considering TCO. 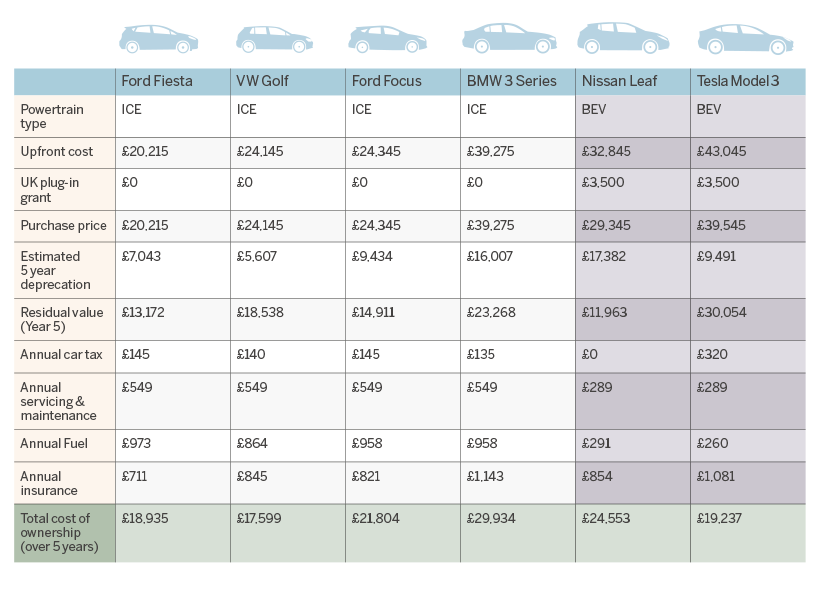 The fuel tank links to the engine which ignites fuel and pushes on the engine’s pistons to rotate the crankshaft and ultimately rotates the vehicle’s wheels. Burning fuel generates lots of heat which means ICEs require a cooling system and incomplete combustion results in particulate emissions that need to go through an exhaust system to help reduce tailpipe toxicity.

The ICE is an engineering marvel. Yet, for all its complexity, we are ultimately left with a vehicle that is less than 30% efficient (tank to wheel), generates unhealthy tailpipe emissions and has thousands of component parts waiting to go wrong: good for automotive servicing revenues; bad for consumers’ pockets.

The electric powertrain on the other hand offers considerably greater tank to wheel efficiency: over 75%. Additionally, the BEV has significantly less componentry. The battery connects to an inverter which switches DC to AC current, powering an electric motor causing the vehicle’s wheels to rotate. BEVs also require a cooling system but tailpipe emissions are nil. What’s more, the biggest cost in a BEV is the battery pack which is estimated to have fallen by c85% from 2010-18, according to Bloomberg. On higher future production volumes, we forecast further cost reductions ahead.

If BEV adoption occurs quicker than expected, traditional automotive companies could be sitting on significant amounts of redundant capital. At the same time, car manufacturers may need to rapidly raise and invest new capital to switch from ICE to BEV production.

For automotive suppliers, the question boils down to vehicle content. Unlike ICEs, BEVs won’t require pistons, crankshafts or turbos. Those component makers could quickly suffer overcapacity issues as their products become increasingly redundant.

Instead, for BEVs, we suspect greater focus will be on advancing battery chemistry, cell and pack design and software development. Automotive suppliers will need to provide new content such as battery management systems, electric motors, inverters and battery chargers.

However, with significantly fewer components in BEVs, common components like electric motors could quickly become commoditised; hence producers of such products might not capture the benefits of the BEV revolution. Greater value creation might sit in more niche and specialised equipment.

BEVs are heavier than ICEs because of their large battery packs so BEVs could see greater tyre wear. BEV adoption could therefore result in higher tyre sales. Could this benefit tyre manufacturers and their supply chains more than is being factored in today?

Consumers worry about being able to charge BEVs at public charging infrastructure, yet this concern could be overblown. We need a mind-set shift: we need to stop thinking like ICE drivers, who regularly  fill up at fuel stations. We must acknowledge the top-up culture of EV charging. Pod Point predict charging locations as per the chart below: 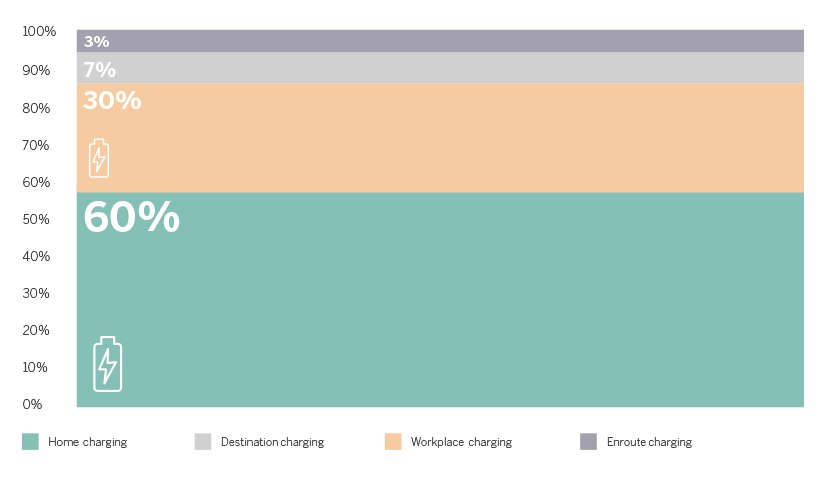 The more important question we should be asking about charging is how might the electricity grid cope with peak EV charging demand? I.e. the rapid increase in electricity consumption as everyone returns home from work and plugs in their BEVs.

The answer may sit somewhere between software management of charging known as ‘smart charging’, dynamic software driven electricity pricing and hardware based reinforcement of localised distribution networks of the electricity grid – let’s wait and see.

Data from the Department of Transport shows c72% of UK drivers park overnight on private property implying most of us could charge our BEVs then.

Given the average UK consumer drives 146 miles per week and, if we charge just five days per week, then on average we need a top-up charge of approximately 30 miles each session. On that logic, using a standard 3kW home charger would take just 2 hours per day.

So, let’s stop watering down the positives of BEVs and instead charge ahead with this automotive revolution.

Also in this issue

Younger and more socially conscious investors have increased demand for Environmental, Social and Governance (ESG) compliant portfolios. This in turn has driven demand for a new class of ESG compliant…

Over the last few years, we have generally taken an international stance on investment and my belief is that we should continue to do so long-term. It certainly has helped performance in recent years…

As has been experienced in post-war Japanese society for instance, rapidly Westernising societies have an established tendency to alter their drinking patterns towards established Western brands.…