The only caveat to that would be Europe’s possible need to punish the UK “pour encourager les autres” from wanting to leave. The worry of the Italians leaving the euro has receded as both Germany and France have made it clear to the Italians that in no way would they be allowed to leave the euro, devalue the lire by 30% and expect to stay in the customs union.

So, this leads me to ponder what post-Brexit UK might feel like. My first observation is that car plants, oil refineries, factories and farmland do not travel well; our fixed asset base is notgoing to leave on account of Brexit. We might see less or more investment going forward, but what has been built already is not going to up-sticks and cross the North Sea.

Tax revenues from these economic assets will stay broadly similar, all other things being equal. And as our gilts are supported by tax revenues being allocated to pay interest and capital redemptions, I don’t worry too much about the loss of our industrial and agricultural heartlands.

The City is different. By comparison to industrial assets, moving the domicile of a bank or insurance company and its balance sheet is easy. It is a bit of a simplification to say that all you have to do is transfer money in a London bank account to a Parisian or Frankfurt bank but it does illustrate the relative ease of transfer. Financial services provide 12% of our tax revenues, and London, in many ways supported by financial services, pays 33% of tax. Seeing the City migrate to Euroland would lower our tax take and threaten the UK’s gilt market. The risk is real.

Luckily I feel the risk is dissipating. Firstly I put forward my own theory that, historically speaking, you have to be an island in order to be a financial centre.

Secondly we hear that the mayors of Frankfurt and Amsterdam have reeled in horror at the thought of tens of thousands of City workers turning up on their door step, driving up property prices and compromising the capacity of their infrastructure. A few months ago we thought that banks would relocate to Europe to gain access to European clients. But now we see large European corporates opening treasury operations in London in order to access London’s liquidity, efficient capital markets and the financial infrastructure (pipes and plumbing of finance) that actually allows it all to happen. 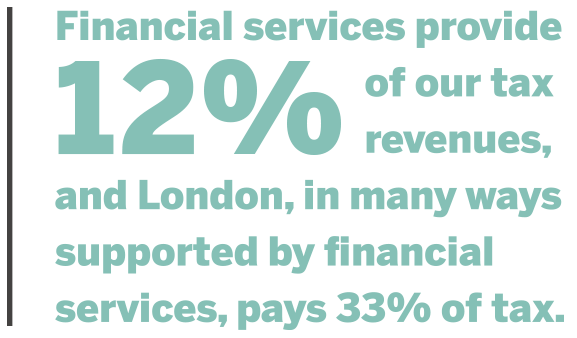 The Americans have said that they want euro-clearing to stay in London so that their banks can have mutual off-set of long and short euro and dollar (for example) positions within the same legal and regulatory umbrella. Without off-set, capital requirements would go through the roof and returns to banks would decline.

We also need to think about the UK’s language, law and longitude. Broadly speaking, every business speaks English which helps with English legal contracts. Most Europeans trust the impartiality and predictability of English courts more than they do of many European countries.

Paris is the only real threat to our City’s financial services but a weak one at that, with so much stacked against it. I don’t believe owners of gilts should worry about the sudden emigration of the City and the dissipation of the UK’s tax revenues needed to support them.

Also in this issue
Guest editorial
A Step Change in Terrorism; What Next?

We are clearly living in unprecedented times and in a new paradigm where “Cold War” has been replaced by “Hot Peace”. A paradigm where we have gone from a bi-polar world to one of multiple asymmetric…

Clipper Logistics (Clipper) run a predominantly UK based business focused on returns, delivery, packaging, and click and collect services. When an item is ordered online from one of a number of…

The simplest definition of beta is that it is a measure of risk. Whilst I won’t derive the mathematics from first principles, it is worth saying that it is calculated by taking the correlation of an…